Scrubby Gully is located on the western side of The Torrington Pendant, where the Mole Granite intrudes the overlying sedimentary rocks. In many places the boundary is notable for the presence of silexite, essentially a topaz-quartz rock. See especially my earlier blog entry “Torrington – Essential Reading” as well as the various references mentioned in the blogs on downloading from DIGS and the ALF site. 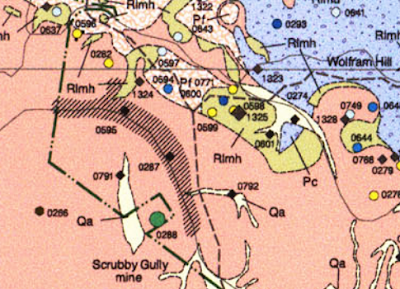 Scrubby Gully may be reached by following the Butler Mine road and then the Mystery Face road, which branch to the left several kilometres north of Torrington from the Silent Grove road. At the Mystery Face car park, the fence directly ahead marks the boundary between the Conservation Area and private property. Follow the fence to the left for 15-20 minutes until it descends into Scrubby Gully. The alluvial areas are marked by hatching on the adjoining map. (The Scrubby Gully Mine shown is a bismuth/tungsten/lead deposit.)

To the right (upstream) are the Scrubby Gully alluvial workings, dating from the 1870’s and 80’s. Large quantities of “tin” (cassiterite) were extracted from here and from the gully below (downstream of the boundary fence). From the 1960’s until now fossickers have visited this area in search of topaz, especially the sky blue variety, for which the locality is well known. 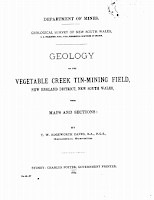 For details of the geology of the diggings, see TWE David’s 1887 memoir on the Vegetable Creek Tin Mining Field (pages 71 and 164 especially. This can be downloaded from DIGS. The Minerama books on Topaz and Beryl also contain useful information.

The topaz comes in two forms – very waterworn (like the tin) and scarcely worn at all, reflecting the two likely sources - the ancient alluvial deposits and vughs in the silexite and adjacent granite. Only a very small proportion is the desirable sky blue variety. Along with the topaz is black tourmaline (schorl) and the occasional sapphire and zircon (both very worn). Pale green beryl is also found as unabraided crystals, no doubt also derived from the same vughs and veins as the topaz crystals and the tourmaline.

Any place where sediment is accumulating in holes and cracks is worth investigating for these gems. Remember that beryl is not a dense mineral and does not concentrate in the sieve centres as the other minerals mentioned do.

Check my fossicking videos from around Glen Innes here . I also have playlists on Glen Innes, the Blue Mountains and New Zealand. 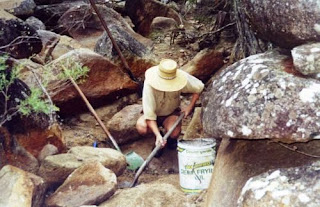 Posted by Geology and Blue Mountains Walks at 05:02 No comments:

This spot has always proved popular with those who came on our Baptist Church Fossicking Group trips and during Minerama (the annual Glen Innes gem and mineral show).

Although I had visited this part of the creek several times before 2003 and had even taken groups there, nearly everyone was not at all keen about venturing into the waterholes which characterise the place. In January 2003 the water level was about as low as it ever gets because of a dry summer and so, with our newly formed fossicking group, we decided to give it a go.


A series of joints in the granite has produced some ideal traps for gemstones. The largest of these is blocked with large rocks at one end (all submerged) and full of sand at the other. The problem with the sand is that there isn’t any place to put it when you dig it out where it won’t wash back in again next time the creek floods. The best I could do was to throw it up into the shallow end and hope to reach the bottom at the deep end.

This worked out fine, as it turned out, because I was able to get in under the rocks and extract some rich gravel. We took no photos of the finds, unfortunately (predigital camera time for us). All the gem photos are of stones found in other cracks nearby on later visits.

There were cutters in every sieve – sapphire, zircon, garnet, black spinel and quartz – and it’s no wonder we called it the Glory Hole.

The name is now used for all that section of the creek. This was the first bonanza we had found in Yarrow Creek and one of the biggest. The gems were embedded in white clay and I have no doubt that there are still good finds to be made in the original location. Just get rid of the sand!

All the other cracks located here have also produced quality gems and I’m convinced that there are both new cracks and extensions of the original ones yet to be explored.

My other fossicking videos from around Glen Innes are to be found here along with others dealing with mining and general geology.
I also have playlists on Glen Innes, the Blue Mountains and New Zealand.


All New England and other Geology blogs and videos
Posted by Geology and Blue Mountains Walks at 04:27 No comments:

The Australian Museum in College St, Sydney NSW, is one of Australia’s most prestigious scientific institutions. 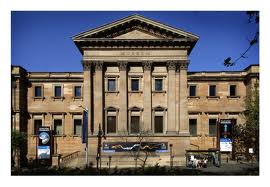 To quote the Museum’s website (here) “We have published the results of scientific work on the Australian natural and cultural environment for more than 150 years. The Australian Museum houses some of the world's most important collections of Australian animal, fossil and geological specimens and cultural artefacts. Research on these millions of objects yields insights into how our world changes through time and how its diversity can be classified and interpreted.”

The Museum’s collections had a considerable influence on me in my High School days, especially the mineral displays, and I have drooled over them many times since. However, it is their printed reports which concern us here. While their geological and mineralogical content is nowhere near as extensive as those to be found in DIGS, nevertheless to use an old expression, they are “a mine of information”.

To access an important part of this resource, go to this site: By selecting appropriate keywords, I was able to come up with these interesting articles. You should do the same, as well as exploring what other resources the Museum has to offer online.

If you locate other useful records, please add them to this entry as a comment and I will transfer them to the main text if appropriate.

Why not check out my You Tube channel here where you can view gem hunting, mining and general geology videos. I also have Glen Innes, Blue Mountains and New Zealand playlists. New subscribers are always welcome.


https://johnsbluemountainsblog.blogspot.com/2013/12/links-to-all-blog-entries-and-relevant.html All Blue Mountains blogs and videos
https://johnsnewenglandminerals.blogspot.com/2013/12/list-of-all-blog-entries-to-date.html
All New England and other Geology blogs and videos
Posted by Geology and Blue Mountains Walks at 04:17 No comments: