LIST OF ALL BLOG ENTRIES AND RELEVANT VIDEOS TO DATE 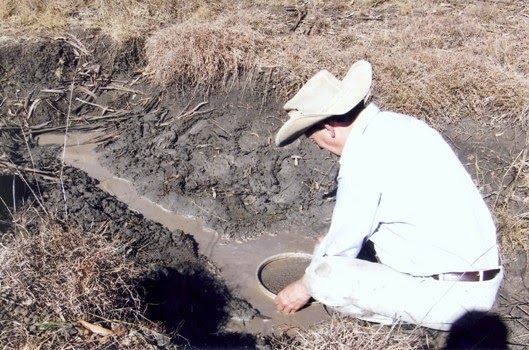 This is an unofficial name for a place that lies on a stock route north west of Glen Innes. It is accessed by a gate on the right hand side of the Bonshaw road (also known as Strathbogie and Wellingrove road) about 15km from Glen Innes. It is a km or 2 after the Reddestone Creek bridge, just before the road begins to descend to Back Plain Creek. There may or may not be a sign (reading Red Rock West) on the gate. Once through the gate, the location may be found by taking left hand branch tracks back towards the road. Total distance from the gate would be around 500 metres.


Access is difficult when there is enough water to use for sieving (this is boggy country) and when access is easy the gully will probably be dry. This spot is at the head of a gully draining down to Back Plain Creek at the bottom of the hill. The country rock is basalt, often deeply weathered to a reddish soil loaded with ironstone nodules.


In the soil, scattered among the ironstone nodules, (which are the result of the weathering of the basalt) are small amounts of spinel, sapphire and zircon. How did they get here? This is not a normal alluvial deposit, of the sort we are familiar with in Yarrow Creek. It has some resemblance to the so-called “wash” at the Wellingrove Fossicking Area, which is 2-3 km away, as the crow flies. There, the overlying basalt ends at the point where the entry track leaves the sealed road. The underlying rock in the reserve is granite, which intrudes the Emmaville Volcanics on the northern edge. The “wash” may be thought of as a reworked volcanic ash layer, erupted before or along with the neighbouring basalt flow. There has been some concentration of the dense minerals, possibly by rain water at the time of the eruption, but there are few of the normal alluvial indicators such as pebbles of quartz which might have been expected to have been derived from the granite.


At Red Rock there may have been ash layers associated with the basalt, either below or between flows, which could be the source of the gems, or they may be derived from the basalt itself where they formed xenocrysts in the lava. See my blog on Dog’s Tooth Sapphires at Pretty Valley (here) for links to articles which throw some light on this subject.


The extract from the Grafton Metallogenic Map show the geology of the immediate area. The numbers refer to mineral localities. 1835 is the Wellingrove Fossicking Area, 1836 Pablo’s Sapphire Mine, 1837 an alluvial sapphire mine on Back Plain Creek, 1839 the Wellingrove limonite deposit and 1840 Hamel’s Gully, an alluvial deposit, probably on a former course of Reddestone Creek. Tb indicates “Tertiary basalt"). Note also the cross hatching, representing “alluvial” sapphire deposits. I’m only guessing, because I haven’t explored the area, that the prospect at Pablo’s Mine and the areas near it showing cross hatching (south of the Wellingrove Fossicking Area) are similar to Red Rock and that gems will be found near the edge of the basalt in other places in the area. None are likely to be productive enough to mine.
Minerama ran a field trip to Red Rock in 2003. Most people found a few colours but the lack of water was the real issue. I believe some cutters were found, however. Our fossicking group went there several times, with the same result – a few sapphires and zircons and a lot of mud and ironstone, enough to make it interesting even if we found no cutters.
My You Tube playlist may be found here. I have three other playlists - Blue Mountains, Glen Innes and New Zealand.


https://johnsbluemountainsblog.blogspot.com/2013/12/links-to-all-blog-entries-and-relevant.html All Blue Mountains blogs and videos
https://johnsnewenglandminerals.blogspot.com/2013/12/list-of-all-blog-entries-to-date.html
All New England and other Geology blogs and videos
Posted by Geology and Blue Mountains Walks at 00:35 3 comments: