LIST OF ALL BLOG ENTRIES AND RELEVANT YOU  TUBE VIDEOS 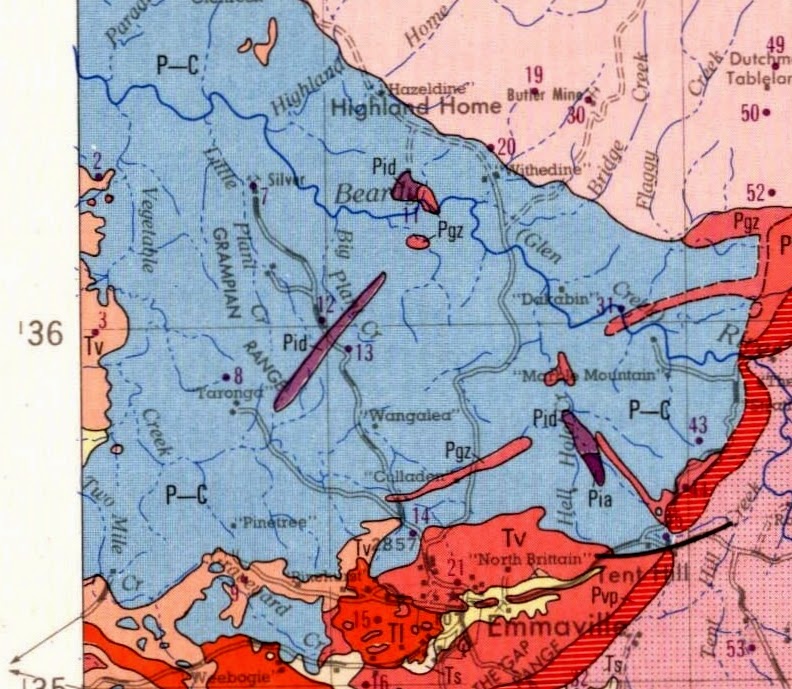 My attention was first drawn to a place of this name when I was looking over the Grafton 1:250000 geological map. I can’t locate a download site for this map, but you can get the 2001 Metallogenic map here. I was primarily interested in locating Webb’s Silver Mine (see my Blog on that place). Right on the road from Emmaville is the number 12, which the legend tells me is the location of Reid’s Copper Mine. On the 2001 map the number is 1053.
I made the trip out there on the 10th October, 1988. The spot is on the left hand side of the road, shortly after a steep climb. This is the Grampians ridge and there are good views back towards Emmaville and ahead to the Mole Tableland. The location (at 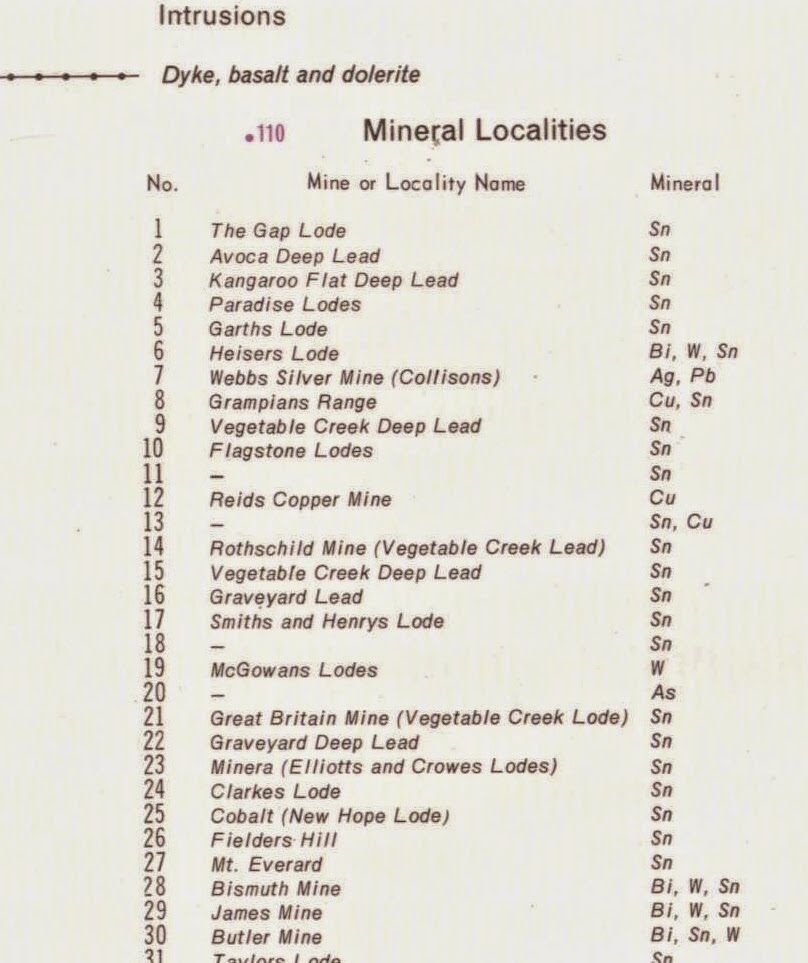 that time, anyway) is entirely in the road reserve. I observed two shafts, nearly filled in with rock rubble and general rubbish. A narrow mineral vein was present in the wall of one of the shafts and the rock appeared to be quartzite. There was some quartz feldspar porphyry on the dumps. I collected specimens of malachite, azurite, a sulfide mineral (which was most likely chalcopyrite or pyrite) and fluorite from the dump. There was clear, pale green and occasionally purple fluorite scattered all over the dump, especially on the side away from the road.

Subsequently, I described the location as a possible self-guided field trip in the first Minerama book (Molybdenite) which may be downloaded here via my Blog from the Australian Lapidary Forum (ALF) site. This made the place well known to fossickers, so whether or not you can still collect similar material today I can’t say. If someone has been there recently, then making a comment (below) letting us all know what the place is like now, would be most welcome.

Here is the earliest report I have been able to find. It’s from Edgeworth David’s report of 1887 “Geology of the Vegetable Creek Tin-Mining Field”, page 160. You can download the entire document from DIGS: Reference number R00031676. Note that there is no mention of fluorite.

This extract is from the report titled “Grafton Maclean 1:250 000 Metallogenic Map - Metallogenic Study and Mineral Deposit Data Sheets (metallogenic explanatory notes)” downloadable from DIGS (here). The reference number is R00056102. The map referred to in paragraph 1 is included in the download.

When you read this, it is obviously referring to the same place I visited in October 1988. Again, it is curious that there is no mention of fluorite. There are several possible explanations. One is that I mistakenly identified some other mineral as fluorite, perhaps quartz. This is unlikely, because I’ve been there with others several times since and we have always found fluorite on the dump. Another is that when the geological field work was done for the metallogenic study, the location was confirmed but the information on the minerals was taken from David’s 1887 report. If this in fact some other prospect and not actually Reid's Copper Mine, then we have a possible solution to the dilemma.

JE Carne’s report “The Copper Mining Industry and the Distribution of Copper Ores in New South Wales” (1908) (DIGS reference R00050669 ) gives information about numerous copper mines and prospects. The New England section begins on page 304. Scanning through this “mine of information” shows that, in the Emmaville district, copper minerals and fluorite had been found together at the Bald Nob Mine, about 5 miles north of Emmaville, and Portion 2, parish Paradise North, County Gough. So there is certainly a precedent locally for this type of occurrence. Perhaps there has been some confusion between locations at some point.

Another useful reference on the Net is Mindat (here). This is a remarkable world-wide data base on almost anything to do with minerals. Searching for “Reid’s Copper Mine” only gives information we’ve already quoted above; there is no mention of fluorite. David places it in "Portion 600, Parish of Strathbogie North". Mindat says "Portion 61".

“Bald Nob Mine” confirms the occurrence of fluorite and copper minerals. The location of the mine is said to be approximately 2km north-east of Emmaville. Searching for “fluorite” and “Emmaville” simultaneously brings up quite a few fluorite localities, amongst which is “Reids/Willowie Mine”, approximately 3km north-east of Emmaville. Then there is “Say’s Prospect”, approximately 6km WNW of Emmaville, Wells’ Lode 1, approximately 6km north-west and Well’s Lode 3, approximately 7.5 km north-west.
All this suggests that there must be more mine dumps in the area worth locating. Add a comment below if you would like to share further information.
My You Tube playlist on gemstones and mining is here. I have three other playlists - the Blue Mountains, Glen Innes and New Zealand.


https://johnsbluemountainsblog.blogspot.com/2013/12/links-to-all-blog-entries-and-relevant.html All Blue Mountains blogs and videos
https://johnsnewenglandminerals.blogspot.com/2013/12/list-of-all-blog-entries-to-date.html
All New England and other Geology blogs and videos
Posted by Geology and Blue Mountains Walks at 17:46 No comments:


LIST OF ALL BLOG ENTRIES  AND RELEVANT YOU TUBE VIDEOS
A group of sulfide ore bodies has been mined or prospected about 15 km south west of Emmaville. I have not visited any of these places; I assume that they are all on private property and under mining leases or covered by exploration licences. If any reader can provide information about accessing these locations, please advise us in the comments area at the end of this blog.
Here is a list of prospects I have come up with – all appear to be in the same general area. Webb’s Consols, Wellingrove Silver Mine, Mt Galena, Matthews Mine, Seaton’s Mine, Munsies Prospect, Lucky Lucy, Castlereagh, Barton’s Quarry and Tangoa. In every case, there appears to be an association with the Webb’s Consols Leucogranite, most often by way of quartz rich veins and pipe-like structures. Some of the ore bodies have actually formed in the Permian volcanic rocks which the leucogranite has intruded. The map from which the extract opposite is taken is included in the downloadable report "Inverell Metallogenic Map 1:250 000" (DIGS reference R00050906).
Minerals recorded include galena, sphalerite, arsenopyrite, chalcopyrite and pyrite. Silver is almost always present in the ore in significant percentages and its presence was the main reason for mining.
The Webb’s Consols mine has been the most productive to date, though one hundred years have passed since profitable mining took place there. At least 19 000 tonnes of ore were extracted (yielding 100 000 ounces of silver), most of this before 1901.
The earliest reference I have found is in the Annual Report of the Department of Mines for 1875, page 111. It reads as follows. “About 14 or 15 miles westward of Glen Innes, in the neighbourhood of Wellingrove, a lode was found which showed on the surface indications of copper, and when sunk upon to a depth of 14 feet a vein of pure galena was met with and worked, but carriage of the ore to the coast being too expensive to allow a profitable return, operations are at present in abeyance.”  This is well before the coming of the railway to Glen Innes, so the ore would have had to be sent to Grafton, a long and expensive process. No doubt the reference is to the Wellingrove Silver Mine.
A problem common to all these mines was the difficulty experienced in separating the lead ore (galena) from the zinc (sphalerite). This was the same problem experienced at Broken Hill, where for many years the zinc concentrate was dumped, despite its containing valuable lead and silver. The flotation process, now normal practice in the industry, was unknown when these small mines were active, though to what extent it would have helped is unclear, considering the relatively small quantities of ore available.
Some of these old mines, especially Webb’s Consols, are currently under investigation by Silver Mines Ltd, though the present (November 2014) price of silver is not exactly encouraging.
There are numerous references from which you may gather information, starting with a presentation to Shareholders by Silver Mines Ltd. (here). An interesting newspaper report from 1891 may be found here. There are many references in old Geological Survey reports. Go to DIGS (here) and put in “Webb’s Consols” for location and you will find lots of information. One of the best of these is called “Webb's Consols - Wellingrove and Mount Galena Mines. Extracts of Annual Reports from 1875 to 1954”. The DIGS reference number is R00025719.
Another well-presented report is to be found in EF Pittman’s “The Mineral Resources of New South Wales”, 1901.  The DIGS reference number is R0005137. The section dealing with this group of mines begins on page 112. The photograph of the mine is also found in this book.
My You Tube playlist on gemstones and mining may be found here. I have three other playlists - on the Blue Mountains, Glen Innes and New Zealand.

Posted by Geology and Blue Mountains Walks at 21:21 No comments: