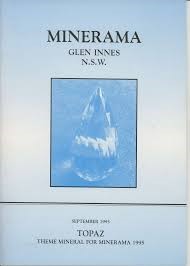 In this blog I’ve attempted to bring together a list of all the places where topaz has been reported to the west of Torrington, in the New England region of NSW. So as not to repeat a lot of what I’ve already written, I’ve given references to some of my articles (in John’s New England Minerals blog). In some cases the reference to topaz may be very minor.
Please note that many of these locations are on private property and you will need permission from the owner to enter.
There are a number of useful references you can download. Firstly, there is the Minerama booklet “Topaz” (here). This gives information and references on many topaz localities in the New England region.
Secondly, there is Edgeworth David’s report on the Vegetable Creek Tin Field, published in 1887. It contains an amazing amount of information on what is still a pretty remote part of the country. At the time the report was compiled, only 50 years had passed since the first Europeans entered the district. You will need to go to DIGS (here). The reference number R00030528 will bring up a PDF of a 2 page map which is invaluable in locating old mines and workings. The same map, but on a single page this time, is at the very end of the report itself, for which the reference number is R00031676.
Thirdly, there are the Grafton-Maclean and Inverell metallogenic maps and data sheets, which are comprehensive reports covering all significant (and often insignificant) mines and mineral deposits, with lots of geological and mineralogical details. The respective DIGS reference numbers are R00056102 and R00050906 .
Fourthly, there is the mineral data base Mindat (here), where searching can often bring up information on a particular location. Much of this has been extracted from the previously mentioned reports.
Here are the links to areas already covered in my Blog:
Gaden’s Lode Gulf Road Emmaville (here)
Specimen Hill, The Gulf Near Emmaville (here)
The Gulf Fluorite Mine Near Emmaville (here)
Scrubby Gully, Torrington (here)
Surface Hill Gem Deposit Gulf Road Emmaville (here)
The Emerald Mine, near Emmaville (here).
These are well known localities, which have been visited by collectors and gem hunters for many years. This is not to say that there is nothing of interest left, on the contrary we continue to hear of attractive (and sometimes valuable) specimens being found in these places.
West of the Beardy River, and entirely on the Inverell 1:250000 sheet, David reported the existence of numerous alluvial tin deposits, many of which are “deep leads”, lying beneath the extensive basalt flows which cover much of the area. I haven’t heard of anyone looking for gems in the area, but David’s descriptions mentions them several times.
The familiar ones are at Scrubby Gully and Surface Hill (both east of the Beardy). Links to my blogs on these are given above. That the topaz, beryl etc at SG and SH have originated from pegmatites around the edges and roof of the Mole Granite is beyond doubt. The same is most likely to be true of the deposits listed below. These gem bearing alluvials are probably derived from sources which have long since eroded away.
All these quotations are from David.
The Kangaroo Flat Lead. Details are on pages 93-94. The location is to the west of  Emmaville. “near the north-east corner of Portion 45, Arvid, at the Avoca Mine near the north-east corners of 104 and 105 in the same parish.” “The gravel averages 2 feet in thickness, and is composed principally of flattish, oval pebbles of claystone 2-3 inches in diameter, and well-worn pebbles and grains of quartz; and gem-stones, as green beryl, emerald, sapphire, topaz etc and fine grains of stream tin chiefly black.”
Hall’s Sugarloaf. Details are on page 95. “Half a mile south-west of Foley’s is Hall’s Sugarloaf, a 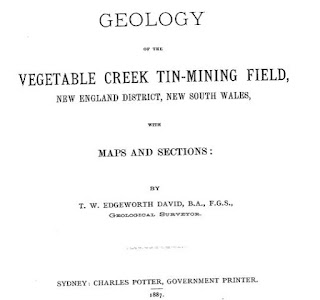 small outlier of basalt capping stanniferous gravel.” “The deposit may be described as a “cement” consisting of pebbles of claystone 3 inches in diameter with small well worn quartz pebbles, quartz sand, and small gems, as topaz and beryl, set in white and grey pipeclay, which has been baked in places into a tough natural brick.” Quite a few other mines in the area are also described, but no mention is made of gemstones. I think we can safely assume that gems are present in the wash at these places.

The Rocky Creek Lead. “The tertiary country embraced under this name extends from Cockatoo to the water-parting between the Severn and Dumaresq Rivers in the parish of Lorne, a distance of 9 miles.” “At the Basalt Hills the gravel has been tested by several shafts and two tunnels. The alluvial beds are composed chiefly of fine quartz sands such as results from the waste of quartz-porphyry (containing a number of beryls), with pebbles of claystone up to 1 inch in diameter.”
“The Gem Lead has been proved to be a rich feeder, falling into the main body of basalt from the north-east.” “The commencement is in an outlier of quartz sand and gravel, capped by basalt in portion 38, Lorne.” “The richest yield here was 3 tons of stream tin from 70 cubic yards of wash. Emeralds and sapphires are associated with this stream tin.”
The Ruby Hill Lead. “The width of the volcanic formation varies from 5 chains to 2 miles.” “Constituents of the gravel are well rolled pebbles of clear and opaque quartz, red and black jasper, and pebbles of quartz-porphyry, the last attaining the diameter of 1 foot. Zircons and sapphires are plentifully intermixed with the stream tin.”
Beginning on page 164 David gives a summary of gems found in the Vegetable Creek area.
I would be delighted to hear from anyone who makes gemstone discoveries in this area. The comments area below can be used.


https://johnsbluemountainsblog.blogspot.com/2013/12/links-to-all-blog-entries-and-relevant.html All Blue Mountains blogs and videos
https://johnsnewenglandminerals.blogspot.com/2013/12/list-of-all-blog-entries-to-date.html
All New England and other Geology blogs and videos
Posted by Geology and Blue Mountains Walks at 03:25 No comments: