Heffernan’s Mine (Heffernan Brother’s Mine) is one of the classic mineral collecting localities at Torrington. It is on private property (Highland Home) north of the Butler Mine/Mystery Face road, as marked on the map, which locates both the mine’s location and the Butler Mine turnoff from the Silent Grove road.

The map itself is taken from the Torrington (Mole Tableland) map referred to in a previous Blog. As you will see, there are numerous other mines and prospects nearby, both on the private land and in the Conservation Area. Heffernan’s Mine is identified as 0272. 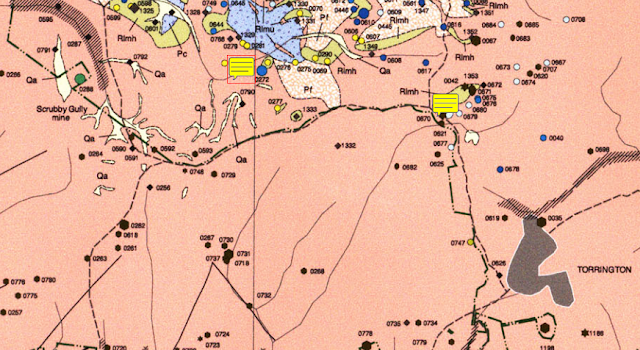 Rasmus (1969) reports on this location as follows:
“ML 52, Parish Highland Home, County Gough. This deposit was proved by shallow shafts and trenches for a distance of about 400 feet. The deepest shaft was about 40 feet. The lode strikes 030° in granite. The lode at the southern end of the deposit consists of decomposed micaceous rock, with vugs containing quartz, feldspar and mica crystal aggregates and occasional prisms of beryl. The wolframite occurs in bunches and is not continuous. At the northern end of the deposit the lode consists of aplite with small amounts of wolframite distributed throughout.” 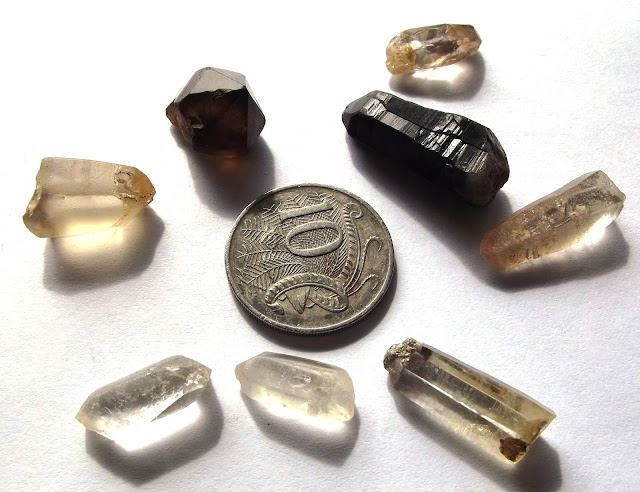 I have collected there several times and always come back with small, but well-formed quartz crystals, and some pale green beryl.

Many people have been here over the years, so if you succeed in getting permission to go into the site, you will have to work for your finds.

Please let us know in the comments section of any previous finds you may have made here and if you succeeded in gaining access to the site. 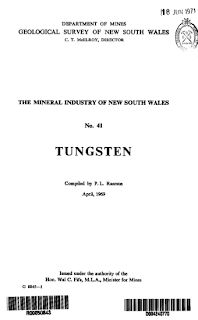 There is more information in the 1993 Minerama book “Beryl” and in the Gemstones books downloadable from DIGS.  Also worth downloading is the Mineral Industry booklet “Tungsten No. 41, complied by PL Rasmus, April 1969”. The DIGS reference is Industry 41.

Check out my You Tube channel here.


https://johnsbluemountainsblog.blogspot.com/2013/12/links-to-all-blog-entries-and-relevant.html All Blue Mountains blogs and videos
https://johnsnewenglandminerals.blogspot.com/2013/12/list-of-all-blog-entries-to-date.html
All New England and other Geology blogs and videos
Posted by Geology and Blue Mountains Walks at 04:38 No comments:

QUARTZ AT “DOWN THE HILL” YARROW CREEK NSW AUSTRALIA

Any fossicker visiting Yarrow Creek soon notices that at least 90% of the gravel he or she digs up is made of quartz, with the balance usually consisting of granite and odd bits and pieces which are probably xenoliths derived from the local granite. So what, you are probably thinking. Well, the fact is that the size of most of the quartz pieces is considerably greater than the quartz which is a normal constituent of the granite. The sand, so plentiful in the creek is, of course, derived from the granite.

So, where does the quartz gravel come from? The obvious answer is, from veins and/or pegmatite dykes in the granite. However, no granite outcrop that I’ve ever seen there has any veins or dykes in it. So if these quartz veins do exist, they must be in places where there are no outcrops.

“Down the Hill” is one such place. There is an extensive alluvial flat immediately upstream of a rocky area where lots of gravel can be found. 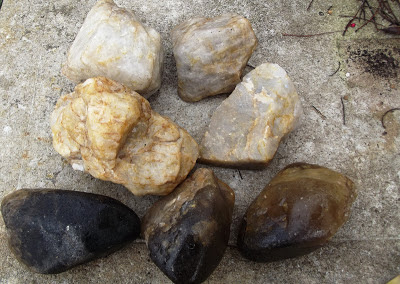 What makes this gravel different is the presence of lots of chunks of white quartz (up to 1 kg in weight) which is different from the small pieces of quartz seen upstream. It would be reasonable to assume, from its rough appearance, that the quartz hasn’t travelled very far. 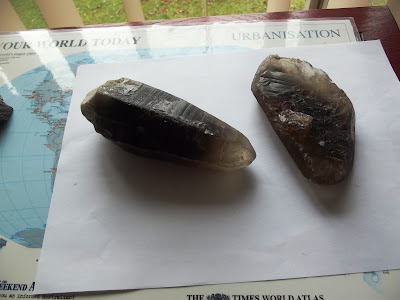 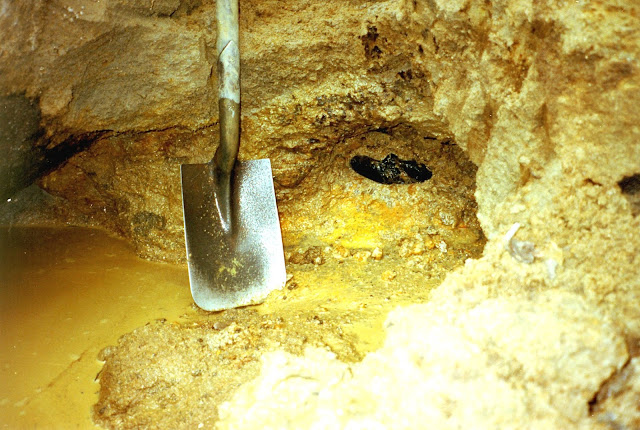 Not only that, but there are other pieces of quartz which are distinctly different from the white ones. Each of these is a single, waterworn, smoky crystal; the largest of which I’ve seen weighs just under 5 kg. Most of these are not particularly clear, but certainly worth finding. 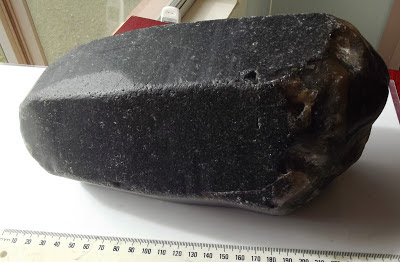 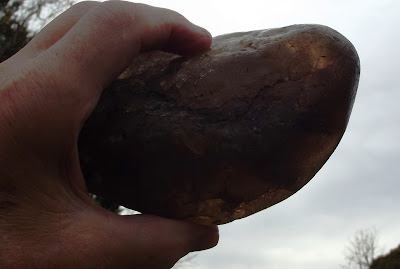 So, apparently, there must be at least two quartz veins or dykes not far upstream from “Down the Hill” which are shedding this material.


I guess we will never really know.

You will find the NSW Geological Survey booklet “Silica” by DK Griffin (1972) a useful source of information. The DIGS reference is Industry 34.

Why not check out my You Tube channel here.


https://johnsbluemountainsblog.blogspot.com/2013/12/links-to-all-blog-entries-and-relevant.html All Blue Mountains blogs and videos
https://johnsnewenglandminerals.blogspot.com/2013/12/list-of-all-blog-entries-to-date.html
All New England and other Geology blogs and videos
Posted by Geology and Blue Mountains Walks at 18:12 No comments:

Peridot is not a gemstone we would normally associate with the Glen Innes district, which is justly famous for its fine sapphires and a host of other gemstones. However, much of the higher country is covered by flows of olivine basalt and from time to time aggregates of olivine crystals can be found in the rock. 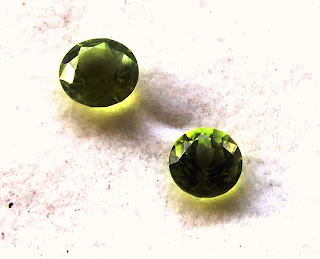 The blue metal (basalt) quarries alongside the Gwydir Highway near Glen Innes are quite extensive and some fine peridot gems have been cut from olivine crystals found here. These two stones weigh in at around 1 carat apiece.

On many occasions people have shown me specimens of a yellowish-green mineral they thought was sapphire. Invariably this was found in a creek immediately below a road bridge or crossing and the basalt used in the road construction has been the source of the olivine. 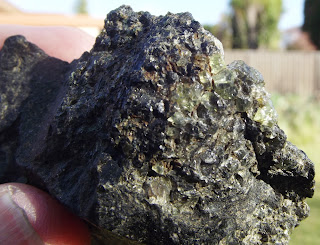 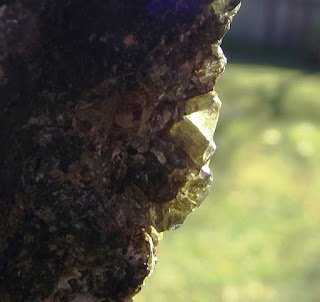 Now that the quarries are owned by the Glen Innes Severn Council, there may be opportunities to search the quarries or at least the rock piles for some of the good material which must be waiting for keen gem hunters to find.

Why not check out my You Tube channel here.


https://johnsbluemountainsblog.blogspot.com/2013/12/links-to-all-blog-entries-and-relevant.html All Blue Mountains blogs and videos
https://johnsnewenglandminerals.blogspot.com/2013/12/list-of-all-blog-entries-to-date.html
All New England and other Geology blogs and videos
Posted by Geology and Blue Mountains Walks at 04:21 No comments:

Pretty Valley near Glen Innes is a place well known for its sapphires, zircons and quartz crystals. It isn’t known for alluvial gold, however, though I’ve always been aware that minute colours of gold could be found by panning.

A few years ago Sue and I were out there with one of our regular Wednesday Baptist Church fossicking trips. As usual, I was digging and sieving the wash and Sue was picking through the concentrates. 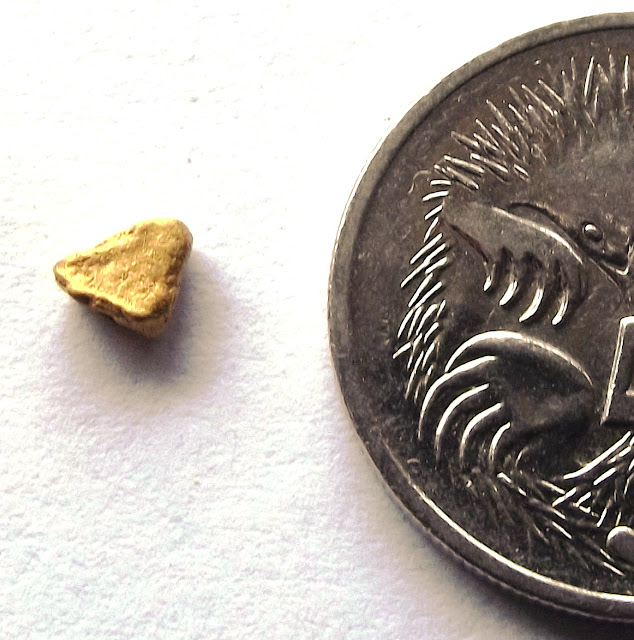 When I returned to the picking table with another pair of sieves for her to go through, she pointed out something unusual she had just found in the bottom sieve. “Is this gold?” was her question. Well, yes, it was – and here it is – the only piece of gold we have ever found at Pretty Valley. It was just big enough not to go through the bottom sieve, and as for weight, less than a gram, I guess. That's an Australian 5 cent coin on the right for size comparison.


I’ve often been asked where gold can be found around Glen Innes. Apart from this small nugget, the only two places where I’ve ever panned were in the Mann River at the Pinkett Road crossing and in the Sara River at Kookabookra. 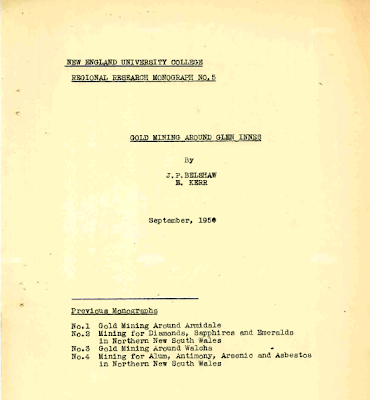 There is a useful document you can download from DIGS titled “Gold Mining Around Glen Innes” by JP Belshaw and M Kerr (1950). The report number is GS 2009/0914. A DIGS search using “Glen Innes” as location and “gold” as a keyword will give you other leads (not the deep variety, though some were mined around Shannon Vale near the Mann River.)

Why not check out my You Tube channel here . https://johnsbluemountainsblog.blogspot.com/2013/12/links-to-all-blog-entries-and-relevant.html All Blue Mountains blogs and videos

https://johnsnewenglandminerals.blogspot.com/2013/12/list-of-all-blog-entries-to-date.html
All New England and other Geology blogs and videos
Posted by Geology and Blue Mountains Walks at 00:21 1 comment: