LIST OF ALL BLOG ENTRIES AND RELEVANT YOU TUBE VIDEOS
A recently reactivated thread on the Australian Lapidary Forum (ALF) about a well-known mineral hunting locality near Inverell, in the New England region of NSW Australia, should remind us all of how precarious our access to collecting localities really is. Read the thread here. Follow it and if a petition is commenced, be sure to add your name to it. It would be a good idea to get involved with the Forum if you aren’t already.
There is a wealth of information available on this locality. I’ve gathered together a number of photographs from some of these and assembled them, into a You Tube slide show, which you will find here. Not only is Elsmore the site of one of the earliest payable alluvial tin deposits in Australia (1871), but it has (in more recent years) become the source of some of the most superb cassiterite crystal specimens in the world. A search on eBay will show that they are in great demand. Until recently, access to the fossicking spot had been made legally possible in an unusual way. The local Inverell Lapidary Club has held a mining lease over the area for the use of its members. By becoming a member of the Club, visitors could legally fossick there. I imagine that the revenue raised has been used to defray the cost of maintaining the mining lease. 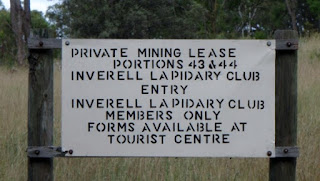 What has caused the Club to surrender its lease I cannot say. It may be that income was falling behind expenses or perhaps that the Club has an aging membership (as many lapidary clubs do) and continuing to provide this service simply became a burden. It could be that changes in the mining law are making it difficult for smaller operators to stay in business. Whatever the reason, follow the ALF thread for more information.
Here are some useful references for you to follow up. As you read you will discover that cassiterite and quartz are only two of the many mineral species which have been found at Elsmore Hill.
The first few are to be found in the DIGS data base and can easily be downloaded. Click here to go to DIGS. The most comprehensive reference is: Geological Survey Report 45 (1966): The Geology and Tin Deposits of the Elsmore Area. The DIGS reference is R00050621. Related to this document, and incorporating much of it, is Elsmore Tin Mine, Inverell which incorporated material from mine records 1934-1981 (DIGS R00046476).
You will discover that the basic geology consists of granite intruding Palaeozoic sediments, overlain by Tertiary basalt. The primary cassiterite deposits are associated with the granite intrusion. Secondary deposits include modern alluvial material and, in particular, “deep leads” – older alluvial material lying beneath the basalt. Much of the prospecting in the area has been (and still is) directed to locating payable wash in these concealed leads. The classic geological map is “Geological Map of the Tin-bearing district around Tingha, Stannifer and Elsmore” by Carne and Pittman (1910). (DIGS R00030525). There is a lot more recent material available also (Inverell metallogenic study) but these should help you to understand what the place is all about.
A search through DIGS shows that there many other reports available from this source. One is Partial relinquishment report EL7177 Elsmore 2011 Malachite Resources (DIGS RE0001817), which is quite recent. Then there are numerous websites which mention Elsmore, eg “World of Shiny Stuff” here and “TG Fine Minerals” here. The article in Mindat includes further photographs, mineral lists and references here.
My gem hunting/mining You Tube playlist may be found here. I have three other playlists - the Blue Mountains, Glen Innes and New Zealand.


All New England and other Geology blogs and videos
Posted by Geology and Blue Mountains Walks at 18:42 No comments: