USE THE SEARCH BOX TO LOCATE BLOGS AND VIDEOS OF INTEREST19

https://johnsnewenglandminerals.blogspot.com/2013/12/list-of-all-blog-entries-to-date.html
All New England and other Geology blogs and videos
Posted by Geology and Blue Mountains Walks at 15:59 No comments:

This place takes its name from the simple fact that it is the bottom end of the property where we have often fossicked. Upstream from it is the place we call The Blockup and below, in the next property, is the Old Mine.


This stretch of the creek begins with a long pool, followed by a short section of rocky ground before the creek passes through another pool. After this there are more rocks and pools with some places where the creek vanishes beneath the rocks, before you come to the boundary fence.


The first pool looks deep but that’s about all I know about it. The first rocky section has been well fossicked but possibilities remain for new ground on the left bank. The landowner told me once that, years ago, the creek had been dammed in a dry season at the end of the first pool before the second pool had been pumped out. No doubt some good finds were made. You could hardly fail in a place like that. Not knowing about that event, I tried some of the more obvious spots and scored some cutters. One was a sapphire piece of around 10 carats which I told Sue was tourmaline until I took it up to her with the next sieve. As it turned out, one end was very dark, the rest was blue. I’ve been holding off writing this blog entry as I wanted to include a photograph of it. Sorry, I must have sold it with some other blues before we moved away from Glen Innes.


Most of our fossicking here happened around 2002-3 and I have no photos of finds from that time. Probably our best find came immediately after Minerama in March 2010. A few good finds were made on the Monday trip just below the end of the first pool. Two weeks later I worked on a crack which crossed the creek, using a yabby pump to get all I could out of it. The first finds included some good clear quartz (no fossicker I know throws that back again) so I was confident that there were better things to follow. The photo shows that I wasn’t disappointed. The following week produced some more, but that was it for that particular crack. No doubt there is more to come.
See the Blog entries for The Blockup and the Old Mine for more information.
My You Tube video on The Bottom End may be found here . My You Tube channel has four playlists, on gem hunting, Glen Innes, the Blue Mountains and New Zealand. You will find the first of these here . Please comment and subscribe.


All New England and other Geology blogs and videos
Posted by Geology and Blue Mountains Walks at 02:30 No comments: 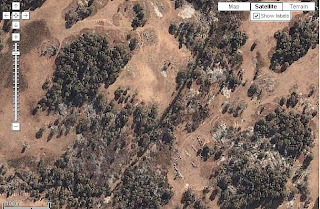 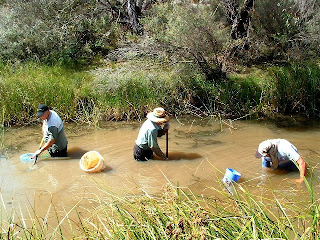 In the Blog on “Sue’s Favourite Spot”, I included an image showing the long “straight”, in Yarrow Creek, which finishes where the creek makes a right angle bend into the Blockup. This is an area of granite where the water flows through a narrow (30-40 cm) channel and continues under granite boulders before emptying into a long pool. This pool finishes at the spot we know as “The Bottom End”.

Much of the creek bed above the Blockup consists of submerged rocky areas and lengthy reedy sections. It looks uninviting and so we have generally left it alone. Those few places where we have fossicked have been the most accessible ones and they have basically had a flat granite bottom (sometimes entirely weathered) with few cracks or holes. I don’t think we left much behind in these spots.

Nevertheless, there is a long section of unprospected creek waiting for a dry season to lower the water level. It can drop more than a metre, so there must be other channels in the Blockup for the water to escape through. 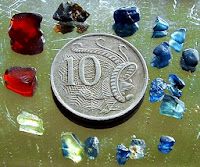 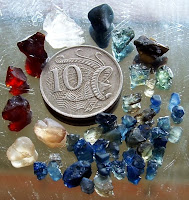 The finds have been the same as elsewhere, that is, sapphire, zircon and garnet in amongst heaps of black spinel with an occasional piece of topaz. Waterworn clear and smoky quartz turns up frequently. There must be heaps more of these amongst the rocks and beneath the reeds. No doubt Captain Mendoza and his Friday Fossicking crew will find some this summer. I’m sure we will read about it in the Australian Lapidary Forum (ALF) here and Jewellery Pirate’s Blog here . My You Tube gem hunting playlist is here . I have three other playlists on Glen Innes, the Blue Mountains and New Zealand. https://johnsbluemountainsblog.blogspot.com/2013/12/links-to-all-blog-entries-and-relevant.html All Blue Mountains blogs and videos

https://johnsnewenglandminerals.blogspot.com/2013/12/list-of-all-blog-entries-to-date.html
All New England and other Geology blogs and videos


Check out my video of fossicking at the Blockup here .

Posted by Geology and Blue Mountains Walks at 02:01 No comments:

Readers will have noticed that we have given names to the various locations along Yarrow Creek where we have taken fossicking groups over the years. There are 14 named places and this has turned out to be a useful way of describing where particular gems have been found or to let regulars know where we intended to go next week.


The Crossing is one of the first places to which I took groups for Minerama field trips. It marks the point where 2 wheel drive vehicles can go no further and even 4 wheel drives would have trouble with it today. The landowner uses the place we know as the Upper Crossing. I’ll tell you more about that place in another blog.


I had not paid a great deal of attention to this spot believing it to have been well worked over on those earlier trips, until I observed a fossicker on another trip removing a few rocks from a hole in the bed of the creek. He had some nice gems, including some topaz, and I determined to pay it a visit on one of our regular Glen Innes Baptist Church outings. It was then that I realised what we had been missing.


There is a series of cracks running across the creek and each of these has been followed under the bank until the overburden has become too great.   There are also several holes jammed up with granite boulders which have yet to be cleared out, if they ever can be.
We always seemed to be beaten by a combination of factors – the weight of the rocks, the depth of the water and the problem of where to put the rocks if we ever got them out. Maybe future fossickers will succeed where we have failed.


There are other possible traps in old channels or beneath deep sand. Who knows?


My You Tube gem hunting playlist is here .There are three other playlists – on the Blue Mountains,  Glen Innes and New Zealand.
My video on The Crossing is here .Enjoy and please SUBSCRIBE!

Posted by Geology and Blue Mountains Walks at 23:48 No comments:

In 2003 and 2004 the Glen Innes Baptist Church Fossicking Group had so many good sites to search for sapphires along Yarrow Creek that it wasn’t easy to decide where to go each Wednesday. “Let’s go to my favourite spot”, Sue would often say to me, and so this place got its name.

We had found it at the end of 2003 by the simple process of walking into the creek and finding that there was lots of gravel in one place, which we eventually extended along the channel for about 100 metres. Our fossicking guests found lots of sapphire, zircon and garnet cutters there. As late as the beginning of 2007 another new patch of gravel was found and I’m sure this won’t be the last.


There have been several highlights of our many trips to this productive spot. One happened when Mal Leyland – well known in Australia for his documentaries – came out with us to get some fossicking      footage for a video on Glen Innes he was working on. As it turned out, I got a nice blue cutter in the first sieve which was all he needed to see. Then he was gone! If you can find a copy of this video, the magic moment is preserved for all to see.


A second interesting event happened right back at the beginning when Yarrow Creek stopped flowing in a dry summer. Long stretches of the creek were dry, but we were concentrating on the Glory Hole at that stage and didn’t even get to check the rest of the creek out. By the time we did, the water was back to normal and hasn’t been down that far again since.


The rich patch we found in 2007 was in a deep hole I hadn’t even noticed until then. It turned out to be chest deep (or deeper) and there was a submerged log down one side. Under the log was where the goodies were trapped. Unless you were standing in the water you could never have found this patch of gravel.


We use the name “Sue’s Favourite Spot” for a nearly straight 500+ metre stretch of the creek which starts where the “Glory Hole” area ends and finishes where the “Blockup” begins. At least half of this is reedy and uninviting, but who knows? There might be another bonanza or two in there.


There is a video on Sue’s Favourite Spot on You Tube here . My You Tube playlist is here. I also have playlists on the Blue Mountains, Glen Innes and New Zealand. Enjoy and please SUBSCRIBE!

Posted by Geology and Blue Mountains Walks at 03:33 No comments: