This is another old mining area I haven’t visited, or if I have I didn’t know its name and it has faded from memory. There are quite a few mineral deposits in the area, of which Gaden’s appears to be the best known. It has been the site of several Emmaville Gemfest field trips and I am indebted to Jewellery Pirate for information and photographs from his Blog (here).

If you examine the satellite image from Google Earth you will see the site of Gaden’s Lode marked in pink in the centre (source: Mindat). The most notable feature on the image is the joint pattern in the Mole Granite which occupies a broad swathe of country across the centre. Observe how these joints disappear around Torrington/Torrington State Forest where the granite is still covered by part of its original “roof”. This is the Torrington Pendant of older sedimentary rocks. The joints have controlled the deposition of ore bodies both in the granite and in the adjacent areas where the granite is still concealed by these older rocks. 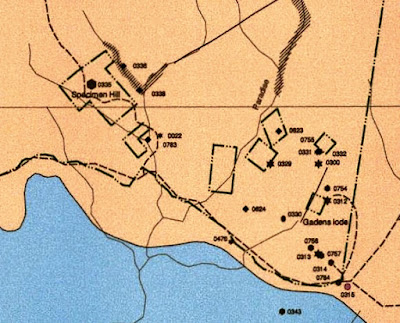 The map was extracted from the Grafton-Maclean Metallogenic Map; the numbers locate the various mines and prospects. I know that some of the numbers are hard to read and I can’t interpret them all, but here is a list of those I can (lowest to highest) with some information (from Mindat) about each, where there is any. The names in brackets are alternative names or nearby mines/prospects.
0300 Chinaman’s Gully Sn vein (Murphys lode; Suicide tunnel). Operated as underground workings, adits, shafts and shallow pits. Production from 1878 to 1965. Chinaman’s Gully alluvials: Dredging operations until the late 1960s.
0312 Gaden’s Lode Sn W Cu U monazite vein (Gaydens lode; Garths lode; Garths wolfram lode; Garths uranium lode). Operated as underground workings, open cut, shafts, adits and shallow pits from 1877 to the late 1960s.
0313 Stormer’s Lode Sn fluorite Cu U vein (Garths lode; Garths wolfram mine; Garths uranium mine; Gadens uranium mine; Gadens lode; Gaydens lode; Gardens lode). Operated as shallow pits, open cut, shafts and adits 1913 to 1954.
0314 Garth’s Lode Sn vein.
0315 Heiser’s Lode U Sn vein (Garths lode; Fish & Chips). Operated as shafts and pits 1877 to 1968.
0330 Stevens and Charlton vein Sn W (Stormers reef). Operated as shafts and shallow pits 1887 to 1970.
0331 Mineral Tunnel Sn As Zn Pb vein. Operated as adits, shafts and open cut 1889 to 1893. Also alluvials.
0332 Suicide Tunnel Sn vein. Operated as underground workings, shaft and shallow pits 1889 to 1893. Located slightly West of Mineral Tunnel workings.
0329 McKinnon’s Reef vein Sn W As Cu Bi (Paradise lodes; Blue lode; Murphys lode; Garths tin lode; Mineral lode). Operated as underground workings, open cut, shafts, adits and shallow pits 1878 to 1950.
0754 Small prospect Sn vein.
0755 Mineral tunnel alluvials Sn placer.
0757 Minor Lode Sn vein.
0758 Hill Crest deposit beryl pegmatite. Operated as shafts from 1890 to 1890. (This may be a wrong identification)
There are three principal types of ore bodies in the area: tin (Sn) veins, which consist largely of quartz and cassiterite, polymetallic veins which contain a wide variety of sulphides such as pyrite, chalcopyrite and arsenopyrite as well as cassiterite and wolframite, and pegmatites, which frequently contain fluorite, topaz, tourmaline and beryl as well as some of the ore minerals already mentioned. All types occur in this location.
Where is this mineral collectors’ paradise? You are 50 years late for the easy pickings, but if you are diligent in searching out the locations listed above (not forgetting the alluvial deposits) you are sure to find something of interest.
The area lies between Flagstone and Paradise Creeks. Coming along the Gulf Road from Emmaville Jewellery Pirate’s Blog here. Thank you Captain for the photographs I’ve used here. Another useful reference is Geo-Log 2011 – a publication by the Amateur Geological Society of the Hunter Valley, beginning on page 42 (here). The whole publication is worth reading, as are the other Geo-Logs in the series.
The track to Gaden’s branches off to the right just after the Torrington State Conservation Area is reached. This is after you have crossed Flagstone Creek. Naturally the track condition is going to vary according to weather conditions but it’s unlikely to be drivable by 2 WD vehicles. Searching DIGS (here) will produce many reports on the area which are easily downloaded.

Of special interest are the references to radioactive minerals from some of these mines and prospects. During and after World War 11 there was a lot of prospecting for uranium minerals in particular when it was commonly believed that the world would soon be using nuclear energy as its major power source, as well as for making nuclear weapons. (The extensive uranium deposits in the Northern Territory and South Australia had not then been discovered.) The publication “Radioactive Prospects in NSW” (here) dates from this time. It should be noted that monazite, which contains the radioactive metal thorium, is also found in this area.
https://johnsbluemountainsblog.blogspot.com/2013/12/links-to-all-blog-entries-and-relevant.html All Blue Mountains blogs and videos

https://johnsnewenglandminerals.blogspot.com/2013/12/list-of-all-blog-entries-to-date.html
All New England and other Geology blogs and videos

Posted by Geology and Blue Mountains Walks at 16:02 No comments:

The Ashford limestone caves are located about 20km north-west of the town of Ashford, between Inverell and the Queensland border. What was once a crown reserve (set apart in 1915) is now part of the Kwiambal National Park (pronounced Kiamble), best known for the spectacular MacIntyre Falls, near which is a delightful camping area at Lemon Tree Flat. Picnic and toilet facilities are also provided at the caves.
These caves are not in the same league as the well-known show caves at Jenolan, Wombeyan and Yarrangobilly, in fact there are very few speleothems (decorations) to be found. What you will find is bats, guano (bat droppings) and a sense of adventure as you explore the unknown (to you) cave system. If you would like to read a fascinating account of “An Excursion to the Severn River and the Wallangra Caves” dating from 1892 (here) you will appreciate that some things have not changed, but others have considerably. The most notable change has been the removal of thousands of tonnes of phosphorus-rich guano for use as fertiliser, a process that was underway long before the reserve was established and continued as late as 1967.


There is a lot of information available about the geology, history and biology of Ashford Caves. I have given a list of downloadable resources at the end of the blog. 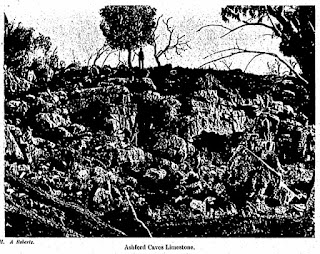 The caves have been formed in a bed of Lower Carboniferous limestone (probably, though estimates range from Devonian to Permian), which has been considerably deformed and largely converted to marble. It contains marine fossils (mainly crinoid and coral fragments), but remember that this is a National Park (no collecting allowed) and beyond the fences is private property, which limits the collecting possibilities to road reserves outside the Park. As the limestone has been traced for more than 10 km there must be some accessible outcrops, since the road basically follows the strike of the limestone. If you locate specimens of interest, tell us about it by adding a comment below.
There are a few typical karst features, notably the dolines where caves below have collapsed. You
might also come across solution grooves, widened joints and potholes as you walk around the limestone hill.

Early references note the existence of two main caves. The removal of so much guano has lowered the cave floors considerably and the two caves are now joined, making a through trip possible. There are a few other small caves but none appear to have much potential for new discoveries.
Three species of bat frequent the caves: Miniopteris schreibersii (the eastern bent-wing bat), Rhinophilus megaphyllus (the eastern horseshoe bat) and Eptesicus pumilus. Most of those you will see are bent-wing bats. Do not disturb them by making loud noises or shining lights on them. During the summer breading season, do not enter the main cave at all.
The guano had accumulated to a depth of several metres in the most favourable places. A typical chemical analysis reveals that it contains 5-10% of phosphorus. Especially during the Second World War, when supplies of phosphate from Nauru and Ocean Island were cut off by the Japanese (both islands were occupied by them) alternative supplies were identified all over Australia. Ashford Caves was one of these.
Some useful references.
The Ashford Tourism site (here);
Guide to NSW Karst and Caves pp 10-11 (here);
DIGS website (needed for the listings below) here.
Annual Reports of the Department of Mines, New South Wales, for the period 1939-1945 (DIGS reference R00001425). This includes cave maps and guano analyses (beginning on page 82).
The Limestone Deposits of New South Wales (DIGS R00050689). An excellent report from 1919 giving information about all the then known limestone deposits.
The Limestone Deposits of NSW (1986) Lishmund, Dawood and Langley (DIGS R00056921). A modern, revised version of the above.
Geological Age of the Ashford Caves Limestone (DIGS R00019198). Report by Raggatt and Booker, 1940.
A Report on a Visit to the Ashford Cave, Northern NSW (DIGS R00023521). 1973 Anonymous.
You will find my gem hunting/mining You Tube playlist here. I have three other playlists - the Blue Mountains, Glen Innes and New Zealand. 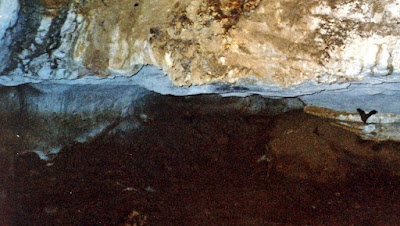 Posted by Geology and Blue Mountains Walks at 16:39 No comments: