I’m sorry to say that I have never visited this old mining area, which is along the Carpet Snake Creek fire trail, off the Gulf road, north-west of the New England mining town of Emmaville. It is one of many hundreds of mineral deposits in the area, mostly discovered in the period 1875-1900.
Mindat (here) provides the following location information:
The workings are on the right hand side of the fire trail about 1km from the Gulf road turnoff, which is on the right not far after the ford across Paradise Creek. Be aware that the access road is not likely to be OK for 2 WD vehicles.
Here are some useful references: Geo-Log 2011 page 64 (here). Geo-Log is an e-zine put out by the Hunter Valley Amateur Geological Society and the whole of it is packed with useful information.
Jewellery Pirate’s Blog (here), describing a field trip to Specimen Hill held during the Emmaville Gem Fest in 2012.
The Mindat article also provides a list of reported minerals from this location: Beryl, var Emerald, 'Biotite', Cassiterite, 'Chlorite Group', Epidote, 'Feldspar Group', Fluorite, 'Monazite', Muscovite’ var: Sericite, Pyrite, Quartz, 'Tourmaline', 'Wolframite'. The quote marks imply that that a mineral group rather than a precisely named mineral species is intended. (The blue colour has to do with links in Mindat which I haven't been able to change.)
Also noteworthy is the inclusion in the article of a photograph of an emerald crystal, which is so typical of those found at the Torrington emerald mine (Cow Flat) that I am certain the specimen came from there rather than from Specimen Hill. To my knowledge, no-one has recorded finding emerald or even beryl at this place. I will gladly change this blog if someone can tell me otherwise.

Note that the Grafton metallogenic map (an extract is shown opposite) locates Sim’s Deposit (EA0336), Farmer’s Deposit (EA0338), the Breakfast Creek Deposit (EA0022) and the Breakfast Creek Alluvials (EA0783) in this area. Several of these (like Specimen Hill itself (EA0335)) are lodes, the others are alluvial. This means that if you are visiting the area, seek out these lesser known spots and in particular do some gem sieving in the gullies – topaz and monazite as well as cassiterite and quartz crystals could be waiting for you. Pretty Gully is to the west of Specimen Hill, Breakfast Creek is on the eastern side. Both contain alluvial cassiterite.

The geology of the locality is well described in “The Mineral Deposits of New South Wales” by Markham & Basden (1974), downloadable from DIGS (here), reference number R00037944. The quote following is from page 371.
“Two or three kilometres to the west, (ie of the Paradise lodes ed.) on the summit of a high hill, is the Specimen Hill (also known as Mt Garth or Mills) lode (GR 45493722 Grafton 1:250,000). Workings, consisting of cuts, shafts to 20m, and adits, extend for 300m. Thin, tin-bearing veins run in several directions. Some of the vein material is very siliceous, consisting of granitoid quartz (clear, white and brown grains) with scattered vughy inclusions containing tourmaline and minor cassiterite and epidote. Patches rich in chlorite are also present. Drill holes at Specimen Hill (Rasmus 1972 a,b) intersected up to fifteen thin veins, but the cores contained no visible tin. Production is not known.” 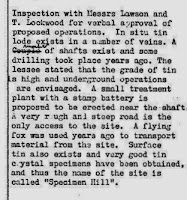 The earliest reference I can find to mining at this place is in 1910; despite much prospecting work nothing substantial seems to have been discovered then or since. The reference to Rasmus’s report on drilling in 1972 is part of ongoing prospecting from 1971 to at least 1977. From the mineral collecting point of view, I found the comments in a report dated 16.11.77 the most interesting (image opposite). This is the last mention of the site I can find in DIGS.
What are you likely to find at Specimen Hill? Quartz crystals for sure, including the fascinating “candle crystals” (which look like they have had wax poured over them); crystal groups; possibly cassiterite crystals and probably schorl tourmaline, epidote and chlorite – if you are lucky, several of these in the one specimen.
As I have no photographs of my own of Specimen Hill, I would like to acknowledge those I have copied from Jewellery Pirate’s blog (here) and Paul Hayes’ “Wild Frontier Crystals” site (here).


To see my complete list of blogs and videos (searchable) click here:
https://johnsbluemountainsblog.blogspot.com/2013/12/links-to-all-blog-entries-and-relevant.html All Blue Mountains blogs and videos


All New England and other Geology blogs and videos
Posted by Geology and Blue Mountains Walks at 22:38 1 comment: