Blatherarm Creek (Blather Arm Creek, Blather Creek) is one of the most popular fossicking areas in the Torrington (NSW) district. This is partly due to the provision of a camping area there, but mainly because of the many topaz cutters which the creek gravel produces. 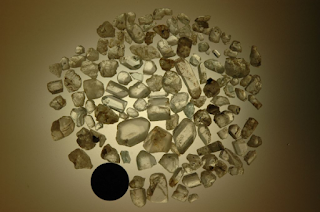 The map has been extracted from a publication of the NSW Geological Survey called “Rocks, Minerals and Landforms of the Mole Tableland” which appeared in 2014. The DIGS reference number is R00059626. DIGS is a site from which a vast number of useful references can be downloaded. (here) I haven’t visited Blatherarm for more than 20 years so I have made use of some photographs from the Australian Lapidary Forum site (ALF here).  Thank you to those who contributed these to ALF. 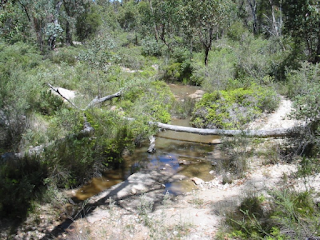 Vegetable Creek Tin-Mining Field (DIGS reference R00031676) page 70, where he writes “The sand and clay in these alluvial workings, in portion 42, parish of Bates, county of Clive, are from 10 to 15 feet deep, and consist of subangular granite sand, with subangular and rounded quartz pebbles up to 6 inches in diameter and rest on a bottom of granite. White topaz and sapphires are very abundant.”

Other Geological Survey references dealing with the area have this to say. “The Mole Granite area is also well known for topaz crystals ranging in colour from clear to straw yellow to blue and up to several centimetres in size. Topaz crystals or fragments can be found in all creeks draining the central Torrington pendant. The topaz originates from numerous silexite or quartztopaz bodies that mainly occur within the Torrington pendant or from the numerous narrow silexite dykes within the Mole Granite. Blather Arm Creek is particularly well known for its clear and blue topaz crystals and a significant amount of topaz has been found in Scrubby Gully and Highland Home Creeks.” 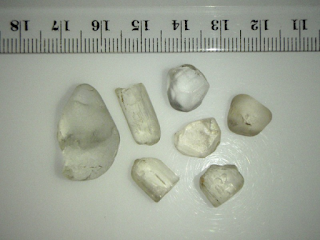 “It was later found that the presence of rare corundum in local creeks was commonly known by local miners and fossickers. Other known localities are Blatherarm, Cattarrh, Bald Rock and Slow Gully Creeks. The source of the corundum is unknown but may be derived from the remnants of high level Tertiary gravels.”


Other documents you could consult include these:


Beryl also turns up in the Blatherarm gravel. It is the typical pale green colour of Torrington beryl and is usually opaque. You cannot concentrate beryl in the sieve centre the way you can topaz because its specific gravity is nearly the same as that of quartz. You will need to look through the stones in the sieve to find any.


The source of the beryl is probably Bollinger’s Lode, which outcrops on private land upstream of the

Conservation Area boundary. Resist the temptation to trespass on this or other adjacent land. The best topaz fossicking is in the permitted area anyhow. Most of the land upstream appears to be swampy. When I was last there, I found most of my topaz by dry sieving old dumps away from the creek (top sieve only), collecting the sieve contents in a bucket and then re-sieving this material in the creek.
It is worth noting that radioactive minerals have been discovered at Bollinger’s and nearby locations. Torbernite is the most abundant of these. See Bollinger's Prospect, Torrington (DIGS reference R00039360) 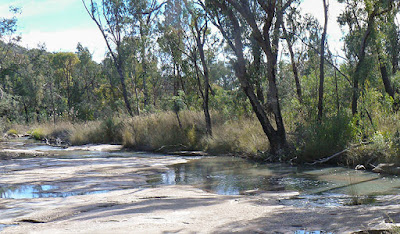 Posted by Geology and Blue Mountains Walks at 01:20 No comments: