THE EMERALD MINE NEAR EMMAVILLE

LIST OF ALL BLOG ENTRIES AND RELEVANT VIDEOS
Any book produced for “rockhounds” in Australia (from the 1950’s on) will mention The Emerald Mine, such is the fascination of this beautiful gem.
I have several in front of me as I write. The first is The Australian Gemhunter’s Guide by KJ Buchester (1965).Writing of Australian emerald deposits, he says “The New South Wales deposit was the first to be discovered, in 1890, at a site about 6 miles north-north-east of Emmaville, a small town 24 miles north-east of Inverell. This location, known as de Milhou’s Reef, had originally been mined for tin, and emeralds were later observed in the old mine dump. 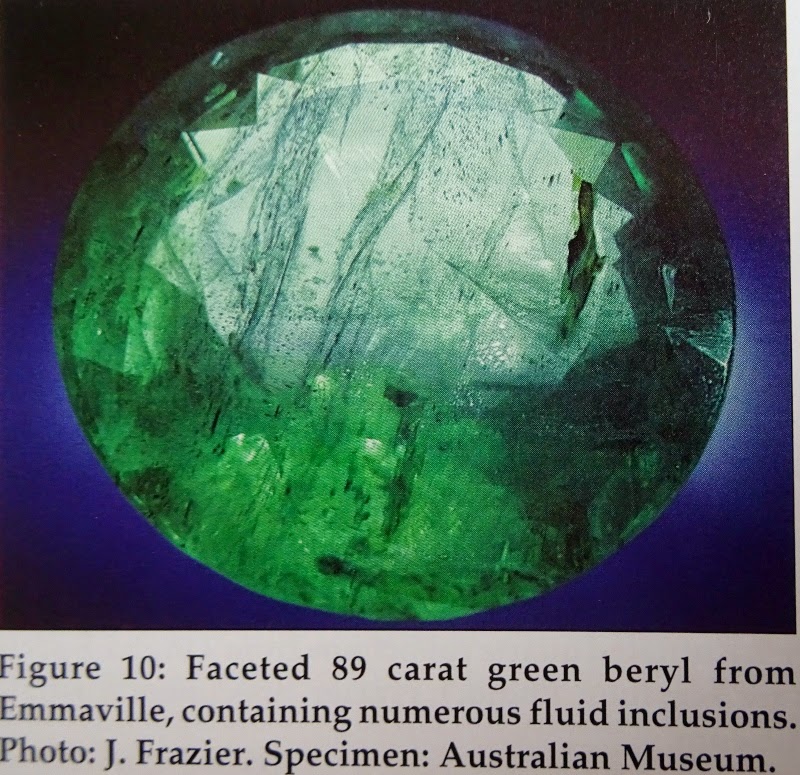 Thereupon a company was formed to follow up the emerald bearing veins.” Buchester then gives some production figures and recounts some of the problems encountered by the miners. He also mentions a specimen in the Australian Museum, no doubt one of those which excited me when I was a teenager.
Later in the book he mentions that the mine was probably under lease and that emerald, beryl, topaz, quartz crystal and fluorspar could be found there.

The second book is “Australian and New Zealand Gemstones”, edited by Bill Myatt (1972). He writes “Near Emmaville in northern New South Wales active mining was carried out in the latter half of the last century. The gem was extracted from a pegmatite dyke and occurred in association with cassiterite and topaz.”

Now all this information is true, but if you are longing to get at those dumps, take note of the fact that most of this material has since been pushed back into the old shafts and access to the public is strictly prohibited. It may be possible to go there with an organised group during Emmaville’s biannual Gemfest, but even that is unlikely. If you want more specialised information on the locality, get hold of a copy of the 1993 Minerama book, “Beryl” from the Aussie Sapphire website (here). If you aren’t a member of the Australian Lapidary Forum (ALF), this would be a good time to explore the site (here).

The photographs on the right were taken in July 1993 as we were preparing field trips for Minerama that year.

TWE David, in the process of becoming Australia’s best-known geologist at the time, reported on the finding of emeralds near Emmaville in the Annual Report of the NSW Department of Mines for 1891 (DIGS Reference R0001418). The report is found from pages 229-234 and is very thorough, in typical TWED style. The  Sydney Morning Herald commented on David’s findings (here). In almost any reference you consult, Mr DA Porter of Tamworth is given credit for the discovery of emeralds at de Milhou’s Reef. He himself downplayed his part in a letter to the Editor of the Herald 2 days later (here), naming Mr AB Butler of Port Macquarie as the true discoverer. History has not been as kind to Butler as it has to Porter and I haven’t found out anything else about him (yet). Donald Alexander Porter was an inspector of school buildings in northern NSW and travelled extensively through the very active mining regions of his day. He not only collected many fine mineral specimens but also had a number of papers published in the Journal of the Royal Society of NSW. A lot of the specimens he collected are now in the collection of the Australian Museum in Sydney, perhaps including the one illustrated. My thanks to the publishers of the Australian Journal of Mineralogy, Volume 4 No. 2 for some of this information and the photographs of Porter and the museum specimen.

There is a lot of information freely available about this particular mine and you can use the resources given in the Blog entry on Reid’s Copper Mine as a guide. An important source of information is the report by Wynn and Loudon (1966) titled “The Emerald and Associated Mines”. The DIGS reference is R0005608. Unfortunately, my copy has been missing for years, suspected of being retained by one of my Moss Vale High School students. The copy you will download from DIGS is missing the maps and sections, showing what a popular location the Emerald Mine has been! Fortunately, I have a copy of these in PDF format and the illustrations at the end of the Blog come from this. I hope you can read it. You can enlarge them.
If you are in Emmaville, make a point of visiting the Mining Museum (here). As well as specimens from this particular mine, there are many other fine minerals to be seen. See also this article from Geohavens (here) for further information on Australian emeralds.
You will find my You Tube playlist on gemstones and mining here. I have three other playlists - on the Blue Mountains, Glen Innes and New Zealand. 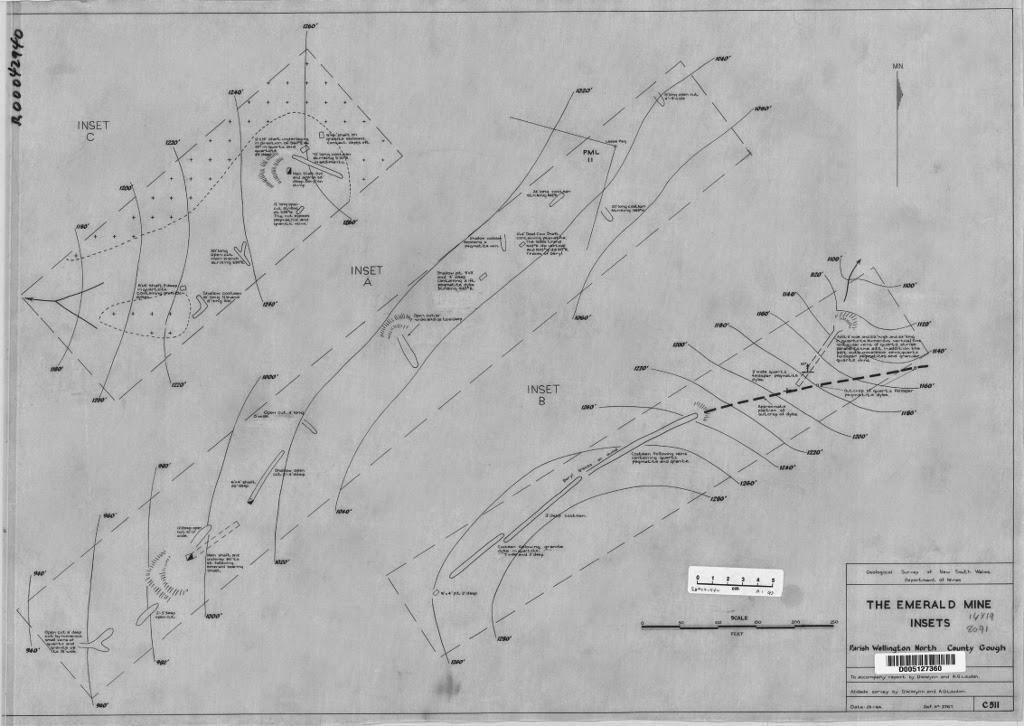 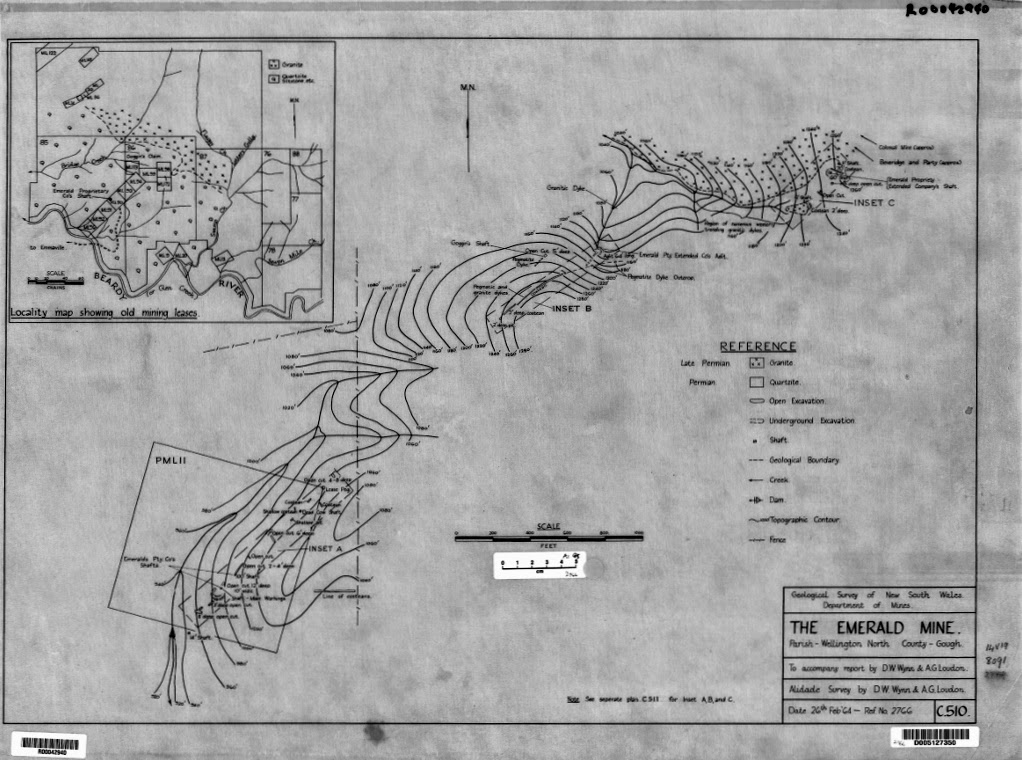 Posted by Geology and Blue Mountains Walks at 16:54